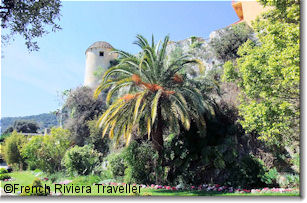 It all began as a fishing port (like so many French Riviera resorts) and now Villefranche-sur-Mer is one of the region's most elegant and sought-after resorts. For pleasure-seekers, nothing beats a day at Villefranche's splendid bay, studded with yachts and bordered by a wide, sandy beach. The shallow drop-off makes the Villefranche's Marinieres beach an ideal family beach.

Villefranche-sur-Mer is a major stop for cruises (250,000 passengers yearly) which means that the tiny old town can be quite busy on summer mornings. In addition to its charming but touristy medieval centre, Villefranche is known for its markets. The Saturday morning market (8am to 1pm) is a good place to pick up local produce and crafts and second-hand dealers organize a day-long Sunday market to sell various odds & ends.

Strolling the streets of the Old Town is one of the greatest pleasures of Villefranche. The pastel-colored houses bordering the fishing port beg to be photographed and you'll have gorgeous views of Villefranche's bay. Notice the unusual arcaded rue Obscure and the busy rue du Poilu.

A day at the Villefranche beach is just the thing to chase away winter blues. The water is sparkling clean and the gravelly sand is easy on the feet.

St-Peter Chapel
The artist Jean Cocteau lived in Villefranche-sur-Mer between the first and second World Wars and decided to redecorate this 14th-century chapel dedicated to the patron saint of fishermen. Cocteau's frescos depict the life of St Peter as well as various religious and local scenes. St-Peter's feast day is celebrated on June 29 with a special mass.

The Citadelle
At the end of the 16th century, the Duke of Savoy constructed this fort to defend the Villefranche port and bay. After admiring the imposing facade, venture inside to discover the Volti Museum, the Goetz-Boumeester Museum and beautifully-tended gardens .

The seafood-themed restaurants along the harbor are good but pricey. Try Carpaccio near the beach, or the sprawling La Mere Germaine closer to the Old Town. Next door, Orsin Blue is another good choice. For cheaper and more casual dining, try one of the pizza, snack or mussels eateries on rue de Poilu.

By Car
Villefranche-sur-Mer is easily accessible by car along the Moyenne or Basse Corniche. It's easier to walk around town than drive as many of the sinuous, roads are one way only and come to sudden dead ends.

By Train
Villefranche-sur-Mer is on the TER line 4 that runs from Nice to Menton. See more on travelling the French Riviera by train.

By Bus
Ligne d'Azur runs bus 81 from the Gare Routiere in Nice to Villefranche. Another possibility is the bus 100 from Mention to Nice which stops at Villefranche. See more on travelling the French Riviera by bus.