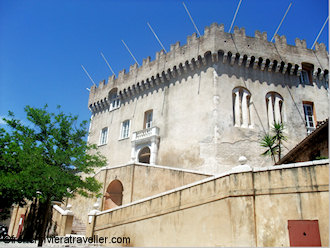 What is the connection between Cagnes-sur-Mer and Monaco? At the beginning of the 14th century, the Counts of Provence gave their little Cagnes fiefdom to the Grimaldis of Monaco. And there the connection ends as these two Riviera destinations couldn't be more dissimilar.

Unlike moneyed Monaco, Cagnes-sur-Mer is a modest coastal town composed of the medieval fortress of Haut-de-Cagnes, a modern commercial district near the sea and Cros-de-Cagnes a seaside fisherman's village. The narrow, rocky Cagnes-sur-Mer beach is bordered by a popular promenade.

The painter, Auguste Renoir, spent the last 12 years of his life in the hilly Collettes neighbourhood. Renoir's home and studio is now the Renoir Museum. In addition to 11 Renoir canvases, the museum also evokes Renoir's life with a display of his original furnishings and family objects. (Closed Tuesday)

The Chateau-Musee Grimaldi in Haut de Cagnes is also worth a visit. Erected in 1310 by Rainier Grimaldi, this chateau was clearly designed as a fortress and then eventually became a baronial residence before becoming a museum.The interior decoration is sumptuous and there's also a Museum of Modern Mediterranean Art, a 14th-century chapel and the Renaissance Church of Saint Pierre within the structure.

A medieval village emerged around the fortress and it's cobbled, Provencal streets are a pleasure to stroll.

By Car
Cagnes-sur-Mer is a quick 20-minute drive from Nice whether by the coastal road or A8 autoroute.

By Train
Cagnes-sur-Mer is on the main coastal train line that runs from Nice to Cannes. The train station is close to the bus station where it's easy to get transport to the Haut-de-Cagnes.

The Cagnes-sur-Mer tourist office has branches in Haut-de-Cagnes, Cros-de-Cagnes and the town center.