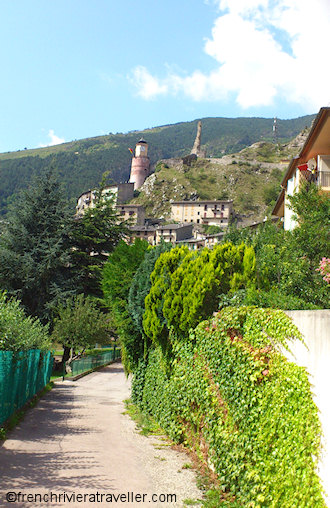 Wrapped around a medieval center and shadowed by the towering Baous massif and the Col de Vence, Vence is a modern but tranquil town about 20km from Nice. The stone walls that once encircled the town are still visible even as medieval houses crowd up against them and the crooked streets are a delight to wander. Notice the 13th-century gate and a 16th-century square graced by an ash tree that allegedly dates from the 16th century. Another square, the place du Peyra sports a fountain built in 1578.

As the seat of a succession of bishops, there's no shortage of chapels but the highlight is Vence's Notre Dame de la Nativite Cathedral.

Begun in the 11th century, it's the smallest cathedral in France

it was the gravitational pull Vence exerted over artists that makes it an obligatory stop on any art pilgrimage. Matisse, Dufy, Chagall, Soutine and Dubuffet stayed and painted in Vence, seduced by the town's particular magic.

The main attraction of Vence is Matisse's Chapelle du Rosaire, the extraordinary chapel entirely designed by Matisse as a gift for his former nurse and model who became a Dominican nun. From the stained-glass windows to the candlesticks, the chapel is a monument to Matisse's genius and a significant artistic landmark.

Art-lovers will also want to check out the Chateau de Villeneuve which houses the Fondation Emile-Hugues. This 17th-century mansion now holds modern and contemporary art exhibitions on a regular basis.

Depending on the season, you can use Vence as a base to launch hikes of varying difficulty or attend the summer concert series, Nuits de Sud, to enjoy music from Africa, South America and the Caribbean.

There are a few hotels in the town center but some really first-rate luxury resorts a little out of town between Vence and St Paul de Vence. Le Mas de Pierre is a five-star family mansion that will spoil you with luxury. The Mas d'artigny & Spa isn't far behind and offers magnificent views. The Chateau St Martin is a spa hotel with a starred Michelin restaurant.

There's no train station in Vence but bus No 400 connects Nice and Vence. You can find the schedule here.

The Vence tourist office has more information about visiting Vence.