This weekend the villagers of Breil-sur-Roya had a ball re-enacting an event from their history in which the populace rose up against the oppressive local nobility. The precipitating event was the so-called “droit de cuissage” in which the governing ruler could sleep with any bride on her wedding night. Even though there is no documented instance of this alleged “right” ever being exercised, the Breillois got mad all over again on Sunday! There was the ringleader of the opposition petitioning the Count of Ventimiglia to hold the offending nobles accountable for their outrage. There was the demure bride, sitting sidesaddle as the Count took her under his protection. Then there was lots of commotion as the rebels pursued the noblemen who were captured, escaped, and captured again. Eventually all was forgiven but not before everyone had a chance to get photographed in their meticulously designed medieval fashions. 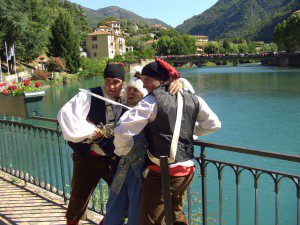 A Stacada is the name of this medieval show and it’s only staged every four years. For more, see the following video:

Get Started
About the Riviera
Riviera Map
Top Sights