If the Cannes Film Festival has an (unofficial) theme this year it would be Woman. “The eternal feminine is at the centre of our cinema adventure” says the Official Catalog.  And so, the striking poster based on a scene from Antonioni’s L’Avventura: 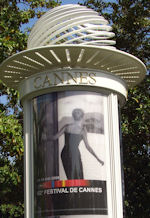 And so, jury President, Isabelle Huppert. And even more significantly, a more than token representation of women directors are competing for the Palme d’Or; oldtimer Jane Campion is up against newcomers Andrea Arnold and Isabelle Coixet. See the line-up of competition films this year.

In 1948 directors Michael Powell and Emeric Pressburger cast Moira Shearer as a driven but conflicted ballet dancer in “Red Shoes”. The Svengali-like director that made Shearer’s character a star dancer insists that marriage is the artistic death of all ballerinas. Yet she falls in love with the company’s conductor. Which will she choose: art or love?

“Red Shoes” stunned the audience at the Debussy Theatre, Friday night. Director Martin Scorcese introduced the film that has just undergone an extraordinary restoration, largely as a result of Mr. Scorcese’s long love affair with the film and friendship with the directors. It was all there just as Powell and Pressburger intended. The 17-minute ballet-within-a-ballet unfolded in a flood of color and movement, undoubtedly the finest ballet sequence ever to be captured on film. There were scenes filmed on the French Riviera over 60 years ago when the Basse Corniche was a dirt track!

In addition to the visual experience, the film poses the question that has bedeviled artists probably since the cave paintings of Lascaux: to what extent does the drive to create exclude a fulfilling personal life? Several years ago, Martin Scorcese gave a Master Class at Cannes and alluded to the toll his career has taken on his personal life (five marriages). One can only imagine the difficulties a woman director faces in trying to get a film project off the ground while keeping a domestic life going.

Near the end of “Red Shoes”  Moira Shearer’s character considers a return to dance against the will of her husband who seems to find marriage to a star ballerina unthinkable.  Lermontov, her company director, tries to persuade her to return saying,  “But you didn’t ask Julian [her husband] to choose between you and his career” “I would never ask him to make such a choice!” she cries. “Then why can he ask you?”

Get Started
About the Riviera
Riviera Map
Top Sights