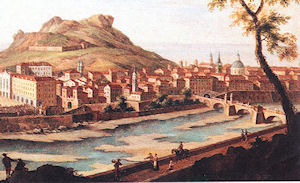 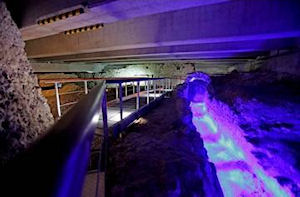 Strictly speaking, the Crypte Archaeologique of Nice is not a crypt in the archaeological sense of the term. It has nothing to do with burial vaults or coffins and everything to do with life in medieval Nice. The "crypt" is an archaeological site discovered when work began on Nice's tramway in 2007. Subsequent excavation under Place Garibaldi revealed a 2000sq metre site that encompassed the remains of 15th-century Nice.

After five years of work, the site was opened to the public in 2012. It makes a fascinating visit. With only a little imagination, the fortified town of Nice as it was painted by Cignarolli (above left) emerges from the shadows of history. In addition to vestiges of the medieval walls and outlines of the original street plan, there's a great deal to see.

The 16th-century aqueduct is estraordinarily well-preserved.

In the 16th-century this bastion was constructed in order to protect the Pairolière gate. In the shape of an ace-of-spades, the bastion was probably damaged by the Turkish siege in 1543 and then reconstructed.

At the end of the 17th century, the Niçois dug a moat on the northern side as yet another protective measure. Against whom? The French! Nice was not yet a part of France (that happened in 1860) and the French kings were in the habit of periodically assaulting the town. Louis XIV finally succeeded in 1706 and proceed to destroy the tower and all the bastions.

All visits to the Crypt are guided (in French). The schedule is 10am, 11am, 2pm, 3pm, 4pm daily except Tuesday. Visits last one hour. Comfortable shoes and a sweater is recommended. A reservation is obligatory and can be made at the Centre de Patrimoine (75 quai des Etats Unis; open Monday-Friday). Tickets cost €5/2.50 adults/students & seniors.

The Crypt has been well-arranged for visitors. The major sites are illuminated in multi-coloured LED lights and connected by metal walkways.