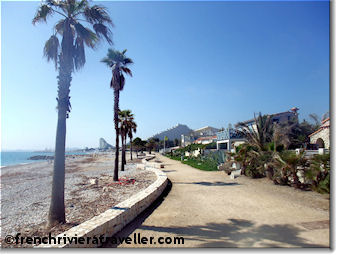 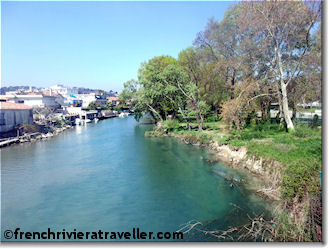 Like many coastal towns, Villeneuve-Loubet is a hybrid of medieval hilltop village and coastal resort. The upper part of town centers around the 12th-century Chateau and the lower town stretches along a 4-km long shingle beach.

In fact, it was originally two towns: Villeneuve was the upper part and Loubet was the coastal village. The coastal stretch is marked by the striking luxury development, Marina Baie des Anges. Although not a major tourist destination, staying in Villeneuve-Loubet is convenient for visiting next-door Antibes. Nice and Cannes are both an easy 20-minute drive away.

Around 500BC, the Greeks established Aegitna around the pond of Vaugrenier but it was taken over by the Oxybiens until they were chased into the mountains in 125BC. Then followed a Roman presence but it wasn't until 1200 that the first historical reference cited "Villanova" or New City. Along with the rest of the region, the town passed under the control of the Counts of Provence and Savoy. In the 16th century, King Francis I signed the Treaty of Nice in the Chateau of Villeneuve.

Chateau-Fort
Built in the 13th century, reconstructed in the 15th century and renovated in the 19th century, this fortified castle is an impressive monument to medieval defensive architecture. It has been in the hands of the Panisse-Passis family for centuries but there are guided tours in the summer months. Contact the Villeneuve-Loubet tourist office for details.

Museum of Culinary Art
Auguste Escoffier was the "king of cooks and cook for the kings" at the turn of the 20th century. The museum is housed in his birthplace and is a tribute to the man who revolutionized gastronomy and invented Peach Melba. The museum is in the heart of the medieval village and is open all year except November. More.

Vaugrenier Park
This blissful park is on the site of the ancient Roman town of which vestiges remain. Most of the 100 hectares is wooded, interspersed with picnic areas and meadows. Around the natural lake is an ornithological station that attracts ducks, herons and egrets.

Marina Baie des Anges
You can't miss this arrangement of pyramids on the sea. Built in the 1960s and designed by the architect, André Minangoy, it was controversial at first but is now recognized as one of the landmarks of 20th-century architecture.

The hotel scene is modest in Villeneuve-Loubet with only two and three-star hotels. Here's a selection of the best hotels:

Train
Villeneuve-Loubet is on the coastal Line that runs from Marseille to Monaco. The train station is along the coastal road. It is an uphill slog to get to the medieval village or take Line 29 from Marina Baie des Anges.

Bus
Villeneuve-Loubet (village and coast) is connected to Nice, Cannes, Antibes and Grasse through the following bus lines:

Car
Villeneuve-Loubet is easily reached from the coastal road between Nice and Antibes as well as autoroute A8 (exit 46 or 47).

The local bus service is handled by Envibus which will shuttle you from the coast to the village and to neighboring towns.