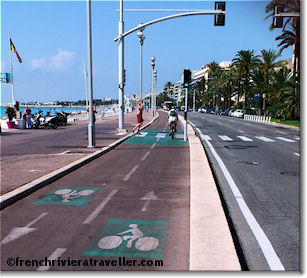 Bike lanes on the Prom

It's a sport and a means of transportation. Cycling in Nice is increasingly popular among locals desperate to avoid Nice traffic and also get a bit of exercise. For the last few years, local authorities have been busy building and extending bike lanes to encourage this environmentally sane mode of transport.

The implementation of the popular velo bleu bike rental program has facilitated the project, making it easier than ever to bike around Nice and even bike as far as west as Cagnes-sur-Mer. The entire length of the Promenade des Anglais from the Port to the airport has bike lanes; it makes a very nice ride. Interior roads that run through the Quartier des Musiciens also have bike lanes that are well-separated from traffic.

Here is a map of the bike lanes in Nice.

Although wearing a helmet is not obligatory, it's certainly advisable. On interior roads, there's obviously a danger from traffic and from passengers opening car doors. Be alert when biking the Promenade des Anglais. Even with the clearly marked bike lanes, pedestrians are known to dart in front of oncoming bikes. The busiest time for bikers on the Promenade is Sunday morning when bike clubs whiz down the lanes on their ultra-speedy bikes, swerving around toddlers on tricycles. Bicycle theft is a major problem. Use a hefty lock (provided with the velo bleu or bike rental) and try to park in a busy, well-lighted place.

On sidewalks or pedestrian streets, put a foot on the ground.

Do not ride along or near the tram tracks.

Pedestrians have the right of way at intersections.

On narrow streets where a car cannot safely pass you, ride in the middle of the road.

Where to Rent a Bike

Velo Bleu
Once you get set up, Nice's municipal bike rental network is cheap and extensive but getting it set up can be tricky especially for non-French speakers. The weight of the bikes make them stable but impractical for hills. Read more.

To rent a bike for only a few hours, try Roller Station (49 quai des Etats-Unis) which offers half-day rentals for €14. For a longer rental I recommend bikesbooking.com which has a great variety of bikes, including electric bikes.

Nice to Cagnes-sur-Mar
Pedal along the Promenade west past Nice Airport. Cross the Var river and head past Cap3000, the shopping center. As an interesting detour turn left after crossing the river and head down to the riverbanks. You'll pass through the parking lot but keep following the river about 1km. Eventually you'll come to the mouth of the Var as it enters the sea. There is a protected bird sanctuary there, known for a great variety of migratory birds.

The Var river
Take the Promenade heading west past Terminal 1 of Nice Airport. Turn left at Terminal 2 following the narrow pedestrian sidewalk marked in orange. Downhill, you'll come to the Var river where there is a marked bike path that runs about 4km along the river. There are no cars and few other cyclists on this flat, tree-lined path. 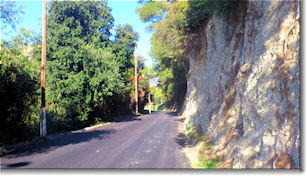 See the hills of Nice by bike

Hills of West Nice
Looking for a sportier ride? Take the Promenade west until Miami beach. Cross the Promenade, taking av de Fabron, bearing left and following signs to the Musée d'Art Naif. Turn right at the Parc d'Indochine and then right again at the end of the park. About 25m later turn left on bd Napoleon. After about 200m turn left at the first traffic light and then make the first right. The road winds uphill and affords a unique view of "rural" Nice. After 45 minutes to an hour, you'll arrive at Haut Fabron, a residential neighborhood. Turn right and follow signs to Ginistière or the Archet Hospital. From there it's downhill back to the Promenade with occasional sea views.